Adaptec's little SAN that can

Adaptec Snap Server 720i was selected for an InfoWorld Technology of the Year award.

Many different combinations of drives, controllers, and software are available in storage arrays for small and midsize businesses, but one example that you should not miss is the Snap Server 720i that Adaptec trotted out last week

With the 720i, Adaptec proposes an affordable yet scalable iSCSI SAN module that doesn't skimp on performance and is easy to manage. From my early test-drive, I can attest that the 720i delivers on those promises, despite a minor hiccup or two.

This compact 1U box comes with four SATA drives, a single power supply, and three Gigabit Ethernet cards to connect to an iSCSI SAN and to your management console. A choice of 250GB or 500GB drives puts total capacity at 1TB or 2TB, but if you need more you can daisy-chain as many as eight

Adaptec SANbloc S50 expansion modules, 2U enclosures loaded with as many as 12 SAS (serial attached SCSI) or SATA drives.

You don't find many storage solutions in the SMB space that can expand so easily to 100 drives, making the 720i an interesting proposition for small companies that expect their capacity needs to grow significantly.

The two evaluation units I received from Adaptec had a nominal 2TB capacity, but using RAID 5 with a hot spare drive leaves little more than 900GB available on each one.

SANbloc expansion modules will be needed if that's not enough for you.

The Adaptec controller inside the 720i supports just about any RAID level, including dual parity protection, which is a common-sense choice for large SATA drives. Still, having only four drives in the array limits your choice to either
RAID 5 or mirroring, neither of which protects against a second drive failure while recovering from the first one. However remote that possibility may be, adding an expansion module to the 720i is a surefire remedy, because the addition of more drives gives you more choices in RAID levels.

Another option is to get a second 720i and mirror volumes across the two, so you can easily switch to the second array if the first one goes south -- more on this later.

Easy Storage Manager
Setting up my two 720i was, yes indeed, a snap. I connected the management port to my data subnet and the other two GigE ports on the back of the unit to my SAN. Considering the 720i has only one power supply, it's good that the onboard management software can also monitor a UPS.

If you have used other products from adaptec, Storage Manager will look like an old friend. Regardless, it won't take long to get acquainted with its GUI, from which you can centralize the monitoring of all of your arrays. In addition to typical management tasks such as setting up the network configuration and creating LUNs (logical unit numbers), Storage Manager allows you to provision storage without even touching your Windows machines.

After installing an agent on each of my application servers, I was able to create and assign new volumes remotely from the management console. Behind the scenes, the provisioning agent took care of formatting the volume, assigning a drive letter and preparing the Microsoft iSCSI initiator for the connection -- this last step is very helpful because it
avoids having to jump between consoles.

During my testing I ran into a couple of network hiccups. For example, restarting after a sudden power off, the array
didn't respond to Storage Manager or to a ping. Nevertheless, the 720i's powerful CLI, which you can access via telnet or serial port, came to the rescue.

The Adaptec CLI's comprehensive online help -- which will even guide you word by word through a command -- puts most
similar tools to shame. I never needed to keep a reference manual close by to type a command, and neither will you.

Magical mirroring
The 720i feature that takes the cake is the built-in remote mirroring. Naturally, mirroring requires two arrays but brings ironclad protection to critical volumes by automatically creating remote mirrors of selected volumes on the second unit.

Remote mirroring is also very easy and quick to implement; in fact, creating a mirror is faster than explaining how it works. Here is how: From Storage Manager I clicked on one of my application servers, chose the volume to protect, and
then clicked the appropriate entry from the pop-up menu. The wizard proposed to create a new volume of the same size on the second array, and I clicked Next and Apply to confirm. My mirror volume was set.

To mimic a real-life scenario, before testing the fail-over, I added more files to the source volume, then increased its size by 5GB. Peeking at the second array, I noticed that Storage Manager had quietly increased the size of the mirror as
well -- so far, so good.

To simulate a failure, I simply pulled the power cord from the 720i. In the time it took me to return to the console, Storage Manager was showing that the array was down. From my application server, I opened the "lost" volume in Windows Explorer and all of my files, including the last batch, were still there. The automatic fail-over was successful; the system had automatically switched my server to the mirror volume.

I don't know if the power-off hiccups I experienced were caused by the array or by some glitch on my network, and frankly it doesn't matter much because sudden power loss is an unlikely event in most installations. What counts more is
that the Adaptec Snap Server 720i combines great scalability, reassuring high-availability features, and excellent management tools, all at a very affordable price and with a three-year warranty on hardware. Few arrays in its class can even come close to that.

Posted by SnapServer Online at 4:04 PM 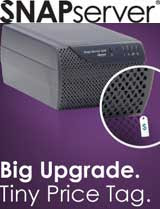